The squid and the whale

So WordPress tells me, “Blogs need a focus. What’s yours going to be? Let’s take a look at some common blog themes!” Then it hits you with the pet blogs, the food blogs, the gossip blogs. For me, this is a problem already: there is no single thing. I’m unfocused. My ‘passions’ don’t photograph well. I’ve tried to ‘drill down’ to what it is that keeps me awake at night, but I keep hitting these small, un-bloggable obstacles. Indoor plants that die. Sandwiches. Animals I Would Like to Have as Pets. Banal exchanges I have with my workmates. And, porridge. (Porridge has been done, anyway – by a winner of the Golden Spurtle, no less. It seems that all whimsical, half-pie ideas have actually been done – not just done, but done amazingly well, like full-pie – by someone else. ) Just as there is now a festival for everything (witness the Lentil Festival and the more elaborate Night of the Radishes), so too there is a blog for everything. Could it be that the last frontier is the unfocused blog?

Anyway, my life here in London is basically a bicycle in traffic on a narrow bridge – small and slow and kind of in the way.

Despite the unfocusedness, there’s one constant, and that’s discomfort. Unease, anxiety, confusion. So I’ve decided tentatively that this blog will be about getting out of my discomfort zone.

Now that I’m living in London, my discomfort is considerably larger and more discomfiting. It used to be like a school of tiny fish: coming at you this way and that, appearing in a riot then vanishing into the next wave. But since leaving Wellington, it’s mega. It’s a colossal squid with a bellyful of defeated whales. The original monster of the deep – a lunging thing with rotating tentacle hooks and eyes the size of soccer balls. That’s pretty much it. Sorry if this metaphor doesn’t work for you. Right now it’s all I’ve got, along with my aversion to meeting new people (sometimes even to meeting old friends), to travel, crowds, late nights, and basically anything that threatens my tendency to hermiticism. (There’s a particular kind of hummingbird known as a hermit. It has greeny browny plumage and is about 7.5cm long. I refer here to this kind of hermit rather than to the person who lives in total seclusion from society.)

Given the way this discomfort sneaks up and envelops you, I don’t believe it’s impossible to altogether avoid it. It’s more a matter of unclasping its hooks one by one. In the coming weeks I’ll be putting together a plan for how to do this. 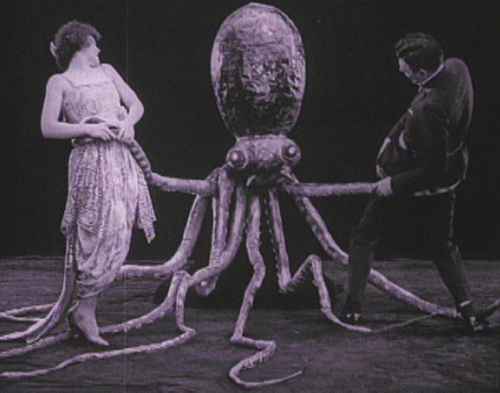 Person, usually on bike
View all posts by ashleighlou →
This entry was posted in Change, Happiness or not, Uncategorized. Bookmark the permalink.

1 Response to The squid and the whale