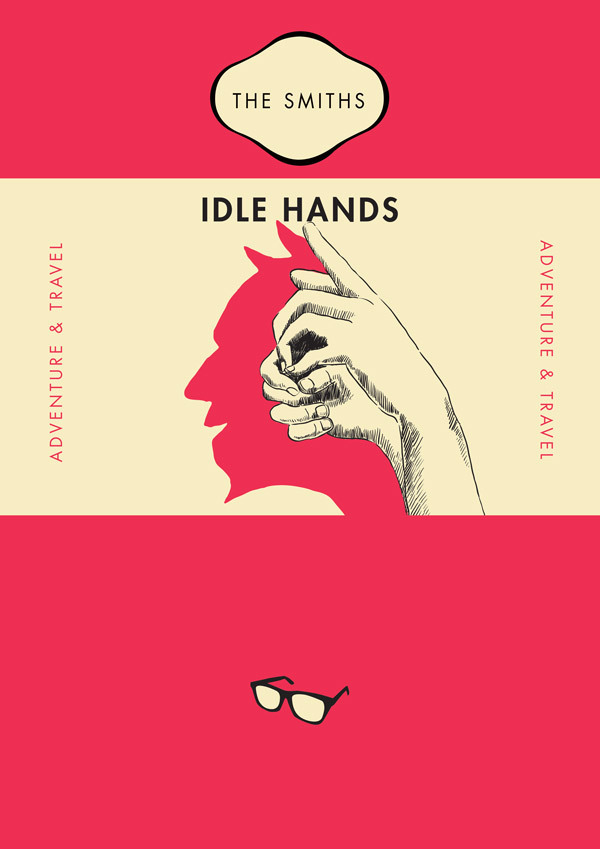 Idle Hands by raid71 on Design You Trust

I’m an incredibly indolent person. I have an enormous natural inability to do … virtually anything, actually. For long periods of my life I just lay in bed and read novels. When people used to ask me what I did, I would say, “I lie in bed and read philanthropic novels”. Somewhere round the house is an edition of A la Recherche du Temps Perdu which I re-covered entirely so that the spine read “Lying in bed reading philanthropic novels” because that’s all I fucking did, you know. When I did Slump for the Statesman, I had that and I had a gig at City Limits, the frontispiece cartoon on the letters page. One paid me 35 quid, the other paid me 70, that’s 105. I had a free flat. And that was it. It took me a morning to do the cartoons. The rest of the time I did nothing. Between ’82 and when I started in a serious suit and tie business in ’86, I did very little. That was the nadir of my idleness.

Will Self – interview in The Idler, November 1993

I’ve always had this epithet “art is the opposite of death” and I still think about that whenever I feel really black about anything. I get in front of my typewriter. The function of writing is the opposite of being dead. You’re living. This is the thing that always motivates me, because I hate the process of writing. I find it hard and hateful to do. But at the end of the day, if I write a couple of good lines, or I write a page that I think is good work, I feel justified in being alive. I feel I’ve got the right to be, in a shoddy way, pleased – I don’t want to say, happy.

Bruce Robinson (director of Withnail and I) – interview in The Idler, November 1995

Soon I’ll be jobless. Jobless in London in 2011. When I wrote my SMART goals (Specific, Measurable, Achievable, Realistic, and Time-based – is this not a suspiciously neat acronym?) at high school back in 1997, I don’t believe this was one of ‘em. I can’t remember any of them, in fact. I wonder what parallel universe they ended up in, and whether somebody else is enjoying their fruits. Their bitter, bitter fruits.

When I arrived in London last year I was unable to enjoy the city for long because I didn’t have a job, and this uncertainty became an ever-present backdrop to the city, making it very clear to me that I was an outsider – a leech, of sorts. I’m not particularly career-focused, nor am I ragingly ambitious, but the structure of working life calms and coddles me. Waking up and having someplace to go or something to do, no matter how little you want to go there or do it, validates one’s existence. It’s as Bruce Robinson says in the quote above: “I feel justified in being alive.” One of the reasons I enjoy my bicycle commute to work, even in the threshing traffic, is that it feels like I’m a part of something; I’m a living particle circulating through the great city’s lungs. Actually I’m just another bloody cyclist.

Why do we work? I guess so that we can more fully enjoy the moments when we are not working. Work offers a kind of life template – you study so you can get a job (or so the grown-ups tell us); you get a job so you can subsist; and the last phase of your life, retirement, is defined by your not-working. Within this template we can get some kind of existential fulfilment as well as dough in the hand. Stud Terkel sums it up beautifully in his book Working (1973), in which he interviewed fairly ordinary Americans about their jobs: “Work is about a search for daily meaning as well as daily bread, for recognition as well as cash, for astonishment rather than torpor; in short, for a sort of life rather than a Monday through Friday sort of dying.”

That Monday to Friday sort of dying. Feel it!

A miserable or very dull job is one of the most miserable miseries. We’ve all had them. Bagging hardboiled lollies (yes, Mr. Shamsuddin, you don’t remember me, but I remember you). Selling Instant Kiwis to luckless/joyless punters. Picking mushrooms. Hauling cement. But I would argue that prolonged joblessness (or worklessness, since you don’t need an official paying job to be working very hard) is worse or almost worse. It is a wretched cul-de-sac – once you’re in there, it could take some fancy manoeuvring and a couple of flattened letterboxes to get yourself out.

What is not helping my state of worry over my impending joblessness is that I keep reading these very bleak, bald statistics about the fiscal, emotional, and mental repercussions of unemployment. For men, it increases the risk of premature death by 63%. How did they arrive at that figure, that last, grim, three percent? Researchers have found, too, that prospective employers are much less likely to hire you once you’re unemployed. Those bastards! Even if you’ve only been out on your ear for a couple of days, your perceived value nose-dives – because you’re now officially a Nobody, a good-for-nothing, a goddamn bone-idle layabout, aren’t you? Then, of course, the longer you’re unemployed, the more lacking in confidence you’re likely to become. If you’re prone to anxiety and depression, your jobless state will make you particularly vulnerable. An interview, once healthily nerve-wracking, is now thoroughly terrifying.

It could be that my fear of joblessness is in fact a fear of idleness, a fear of stasis – and by extension, a fear of disappearing. “The function of writing is the opposite of being dead,” says Bruce Robinson, and you could say the same about any kind of work. It could save you from the blackness. But, let’s not get ahead of ourselves. It could actually just be the fear of not having enough money to buy food.

The philosophy of the periodical The Idler (edited by Tom Hodgkinson, inspired by the great Samuel Johnson) is that the work ethic destroys us, saps our joie de vivre, stunts our creativity and verve and spontaneity – and that the more fulfilling alternatives are liberty, autonomy and responsibility. The self-proclaimed idlers interviewed by the Idler, mostly male artists like Will Self and Bruce Robinson and Damien Hirst, all seem to claim that idling has got them to where they are today. They have repressed nothing, they have answered to no one, and they have fulfilled themselves in other ways. For me, the difficulty in accepting this as a template for living is that all of these idlers are extraordinarily talented, super-motivated-when-they-want-to-be, beautiful restless minds who would be squandered in regular jobs. They sort of owe it to the world to be “idle”. Most of us don’t have that luxury. You could argue that if more of us were to liberate ourselves from real work, the world would be a more extraordinary place.

As Oscar Wilde quotes go, this one is as obtuse and snobbish as the rest of them, but he’s certainly right that it’s difficult. But the reason it’s difficult is that it feels so isolating. It’s lonely not doing stuff.

Person, usually on bike
View all posts by ashleighlou →
This entry was posted in Change, Uncategorized, Working. Bookmark the permalink.

3 Responses to Giz a job?