The rest is easy (a found poem) 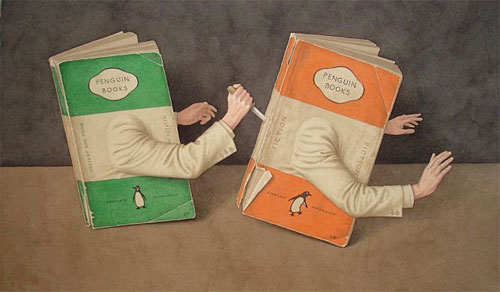 I’ve been doing a lot of writing recently. When I was feeling a bit disheartened today I revisited the Guardian’s good old Rules for Writing Fiction (though the rules could apply to writing anything). After reading them, I found myself a bit more disheartened. So I went and wrote this poem.

The rest is easy

I like a lot of talk in a book

and I don’t like to have nobody tell me

I want to figure out what he looks like

from the way he talks.

The reader will just leaf ahead

When an idea comes, spend silent time with it.

by better ones. Afterwards

it won’t matter to you that the kitchen’s a mess.

The rest is easy.

from a few brief keystrokes.

On the page they flare

into desire. A lot of men still think that women

lack imagination of the fiery kind.

I once noticed Mary McCarthy

ending a line of dialogue with

and I had to stop reading.

If it was bad when it went in the drawer

it will be worse when it comes out.

Stop feeling sorry for yourself.

No amount of black pullovers or being

will ever add up to your being a writer.

Your own life will never have

before he started writing it.

But if you’re writing a novel with a contemporary setting

there need to be long passages where nothing happens

save for TV watching.

Don’t make telephone calls or go to a party.

No going to London.

No going anywhere else either.

The first twelve years are the worst.

If nobody will put your play on

put it on yourself. No one cares.

to the editor. No one cares.

even though I hated it. Was I performing a haka,

or just shuffling my feet?

But it is the gestation time

write. On you go.

Person, usually on bike
View all posts by ashleighlou →
This entry was posted in Poetry, Working. Bookmark the permalink.

5 Responses to The rest is easy (a found poem)