Posted on December 9, 2011 by ashleighlou 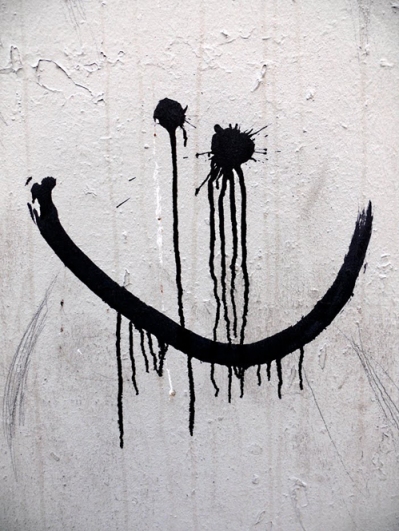 On Wednesday after work I got on my bike and rode home. At an intersection on Brixton Road I pulled up behind a big red bus. It was dark, and I could see parts of my reflection in the bus. I have two white lights on the front of my bike; one light is flashing and the other is steady. I saw the reflection of the two lights. The lights looked like eyes in a face, looking straight into me, half-glaring, half winking. I saw that face as the face of death.

I was going to write about the joys of a newly serviced bike, but there’s only so far you can go with that. It’s not ever-present. Not like death is. Lately, the thing I’ve been thinking about a lot is getting killed while riding my bike.

In Wellington, I used to imagine picturesque, almost delicate deaths. I died by being blown by the wind into the harbour, or my brakes failed when I went down an 80-degree-angled hill. My imagined deaths are very different over here. In a roundabout snarling with buses and cabs, I find myself encircled by alternate universes in which I’m getting killed in all sorts of ways. Suddenly a lorry is whoomping overheard, or I’m being squeezed to death between buses, or the shape of my body is imprinted on the flung-open door of a car. I’m not sure if I’m really afraid. I think it’s that I have become habitually alert to the fact of possible death. The alertness has become this hyperactive caution. What might happen has become too vivid.

This year, as of Friday 2 December, sixteen cyclists have been killed in London, one on the road where I work. I have passed a couple of crash sites: the telltale sign of an ambulance and a discarded bicycle with an orange cone next to it. The orange cone.

One day a few weeks ago, my bike was at the mechanic, so I walked down to the tube. I was actually looking forward to taking the tube; it would be nice to sit down and read the paper, and just be motionless, not thinking of death. The tube is great for looking at things, too, like people’s shoes, and the books they’re reading. But there were severe delays that morning. (When delays become “severe” they basically become living beings.) We were sitting in the carriage for ages, not moving. Then the announcement came: “There is a body on the tracks.”

Everyone in the carriage groaned.

My brother Neil calls this “the existential groan”.

Death in the underground is tragic and horrible, and what makes it even more tragic and horrible is that it’s so routine. One can use it as a legitimate excuse for being late to work, and this excuse will be shrugged off by one’s boss. I wonder if the fact that death is so routine, often so banal, makes it hard for us to be constructively aware of it. By constructive, I mean an awareness that compels us to live more fully. I just realised it’s not really possible to write this without referencing Steve Jobs’s 2005 Stanford Commencement Address.

Remembering that I’ll be dead soon is the most important tool I’ve ever encountered to help me make the big choices in life. Because almost everything — all external expectations, all pride, all fear of embarrassment or failure — these things just fall away in the face of death, leaving only what is truly important. Remembering that you are going to die is the best way I know to avoid the trap of thinking you have something to lose.

Illustration by Eddy Dukkers via 50 Watts

What I’ve been experiencing is not constructive, but a hyper-awareness of death. This is like a thin gauze of morbidity over my eyes. Traffic lights in disrepair have bags thrown over their heads, tied around their necks. The un-greased chains of advancing cyclists squeak like rats. Each bus is the gaping maw of death.

Yesterday I was talking about this with my brother Neil, also a keen cyclist. He described being run off the road by a speeding car whose driver was talking on a phone. “I heard myself let out this bellow of utter fear,” he said, “and I realised it was the death fear.”

I was going to take some field recordings of the bellows of death fear, but I felt that it might distract from the purpose of this post, and maybe also be off-putting to would-be cyclists.

So, I need to relearn how to momentarily suspend my belief in death. Most of us do this automatically. Why else would we travel in cabooses 200 feet underground, practically in moving graves? Why else would we leave our houses?

The accepted wisdom for London cyclists is to ride like everybody’s trying to kill you. (As Homer says, peering into Bart’s face: “People die all the time, just like that. Why, you could wake up dead tomorrow! … Well, good night.”) I’m all for defensive cycling. But I’m not sure that the they’re-trying-to-kill-you philosophy will help you feel good about being alive. We soon become pickled in our own rancid fear and loathing. It’s not easy to break out of this mindset. As cyclists we are more present in the ‘fearscape’ of the city than drivers, as this brainy article Fear of Cycling by Lancaster cyclist Dave Horton has it:

The city is full of fear, which is partly why and partly because people move in cars. Increasing car use can be seen as a retreat from the ‘public’ world of the city, a means of cocooning oneself and one’s family from ‘the outside’, from fear of traffic but also from dangerous places and people. Cycling puts the person back into this fearscape in a much less mediated way.

One strategy I’ve been trying out when I ride, purely to quell my morbid imaginings, is to construct an imaginary cocoon of safety. I do this by thinking of cars and buses as my friends. I’m like a suckerfish on the backs of the big friendly giants of the sea: the whales and dolphins. (Bear with me here.) I came up with this when I had the realisation, while riding alongside a bus, that the bus was shielding me from other traffic. It was also stopping pedestrians from walking out in front of me, because pedestrians are much more likely to wait for a bus than they are for a bike.

This strategy completely upends my usual way of thinking about traffic. It is clearly counter-intuitive, possibly foolish. But it momentarily calms my hyperawareness of death and puts me back in the landscape as opposed to the fearscape.

Sometimes, when a car is cruising along beside me, I think how much like old friends we are – just rolling along together, two benign species. At the end of the road, well, we’re both glad to be at the end of the road. We park our bikes or our cars and go into our houses and have dinner. 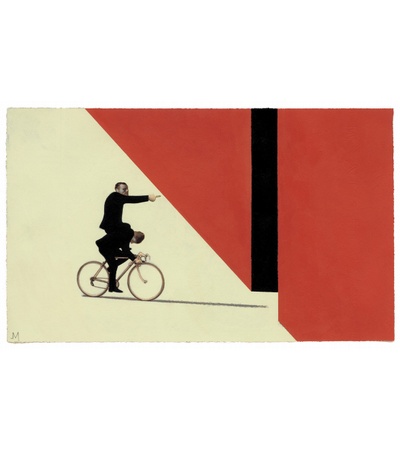 Person, usually on bike
View all posts by ashleighlou →
This entry was posted in bicycles, Happiness or not, London, Uncategorized. Bookmark the permalink.

3 Responses to The orange cone