Hair is dead cells. When it’s on you, we all want to touch it, but as soon as it’s off you, in your bed or your shower, it’s suddenly, oooh, horrible. So hair’s a really weird thing. But I think it’s sort of beautiful.

The Rake’s Progress by Henry Hudson via 20 Projects

There’s an artwork by Henry Hudson called Crapula. The centre of the artwork is a large hairball made from human hairs that the artist collected from the London Underground.

I was down in the Tube at King’s Cross, and I felt these gusts of wind and then there it was: the tumbleweed.

The hair tended to collect at the bottoms of stairs, wherever there was a lot of foot traffic. Hudson went round all the different tube stations, mostly King’s Cross from the Hammersmith & City Line, and the Metropolitan and Circle Lines, picking up people’s hair with his Marigold gloves and stuffing it into a Tesco bag or his dinner jacket. He got used to people looking at him edgeways. He made a big ball out of the hair. For a while he didn’t know what to do with it. It sat there in his studio. ‘It was impossible, horrible. … I tried putting a comb through it. Impossible. There’s no way.’ Finally Hudson decided to make something out of it. He made a misshapen resin sculpture of his own head and put the hairball inside it. He put a lightbulb inside the hairball. The hairball glowed softly from inside the head, which was tilted slightly as if looking hopefully upwards. Hudson skewered the head on a rusty pole that stood inside a beer barrel. He called it Crapula, meaning, basically, hangover.

I don’t know London as well as I should by now, but I suspect that this artwork captures something of the paradox of it. There is the filth and crap that humans leave behind as they move around the city, and there’s the glumness and self-disgust that you can feel amidst all the excess of London. But something bright emanates from everyone being here. Despite the filth and depression, it’s filled with possibility – a light comes from that, and that light is addictive. We are it; it is us. That’s romance, I guess. Maybe it’s the romance of all big filthy cities.

When I came to London I was obsessed with the idea of having a London moment. I’d heard people talk about it. I’d probably be standing on a bridge when it happened, or I would be emerging from the tube onto a sunny street. It would be the moment where the city finally unfolded itself to me, like a scene in Heavenly Creatures, and I would know that I belonged and that my streetwise, fully navigational London self had arrived at last. Well, as time has gone on, as I’ve cycled thousands of kilometres and ridden hundreds of buses and visited dozens of tourist landmarks and eaten a goodly share of identical Pret sandwiches, I’ve realised that this won’t happen.

The moments you have in London are not of insight but of bewilderment and uncertainty, where the vastness of possibility suddenly rears up at you. They are moments of extreme frustration and claustrophobia, of wanting to get out or wanting people to get out of your way. But London doesn’t really give a shit whether you explore the possibilities. It doesn’t care if you leave – though it would probably prefer that you did – because there will always be someone ready to take your place, always another plane about to land and yet others circling above, waiting. 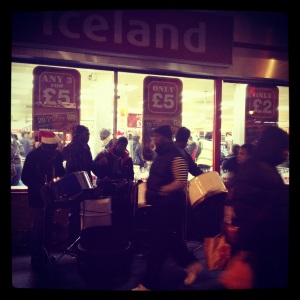 I’ve learnt that when you’re feeling rough in London, London will go out of its way to make you feel rougher. Last week I was waiting at the lights at the intersection of Coldharbour Lane and Atlantic Road. It was Friday morning, it was cold, I had a long ride ahead of me, and I was feeling rough. Up ahead at the meat market, I could see a truck parked with its back doors open and a row of pink carcasses hanging inside. I was determined to cycle past as quickly as possible. The lights changed and we set off. But the swarm of cyclists in front of me wanted to take their time. They were all slow, ALL OF THEM, desperately slow. Some had wicker baskets. I couldn’t get out. I felt the paralysed panic of being trapped in a slowly-rising wave full of jellyfish. I tried to get past so I could get past the carcasses, but because the road is narrow there I was forced to slow to a crawl past the men hoisting out the empty carcasses on their shoulders, pink flesh lolling, hooves jiggling, the smell of meat and gumboots and gutter.

But the very next day I was waiting at the same spot, and an old man cycled up beside me and looked at me and said, “Now THAT is the most pleasant cycling outfit I have ever seen and am likely to see in the future!” So, you’re always being asked to give London another chance. 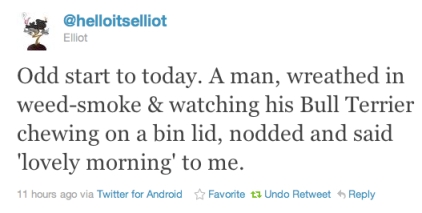 I think you need to be quite emotionally stable to live well here. You’re always a few steps away from being utterly miserable, or content, or lost. London turns you into a dread-locky teenager: “I HATE MY LIFE!” and then into an old, old soul. It also makes you somewhat toxic. When you blow your nose, black stuff comes out. This could be a metaphor for something but I don’t know what. London also gives you a new awareness of clouds, which seem to lie at the very heart of the buildings in the city. The trick is to view these clouds as benign. Look through them. Clouds are not necessarily ominous, or claustrophobic, or apocalyptic. They’re just the always-clouds of London. And when they’re suddenly not there, the blue sky is wonderfully surreal.

Last Tuesday at around 4am my boyfriend woke me up roaring. He’d somehow dislocated his knee. We strapped up his knee in a towel and duct tape, called a taxi, then shuffled down the stairs. An hour later the taxi came. The driver stood there unmoved, waiting for me to help Matt into the back seat. Off we went in silence. The indifference of the driver was overpowering, a chemical scent. I found myself muttering, “If this was New Zealand, he would’ve, like, asked what was wrong.” The A&E in Camberwell was a grim place. A woman lay in the corner under a pile of coats, making strange whooping noises. A young guy sat with his head in his hands, crying. Whenever a nurse or someone went past, he would try to talk to them – “I’m still bleeding.” Another man was stretched out across chairs, snoring, until some nurses came to fetch him. “HEL-LO,” they bellowed into his face. “HEL-LO,” until the man finally got up to stagger along, unhelped, behind them. It didn’t take long for Matt’s name to be called, and they got him a grimy, rubbery-looking wheelchair.

The knee got put back in place with the aid of a whole lot of laughing gas, and then Matt could walk again and we were ready to go. And that was it. It didn’t cost anything. Although the nurses and doctors had a necessary hardness about them, they had helped Matt and everything had worked out all right. For some reason that crappy old wheelchair has become symbolic to me. Grubby careworn thing that keeps on moving because it’s got to carry so many people.

Person, usually on bike
View all posts by ashleighlou →
This entry was posted in Happiness or not, London, Struggling, Uncategorized. Bookmark the permalink.