Talk first to the dog

If you cross paths with someone walking a dog, do you talk first to the person or the dog? 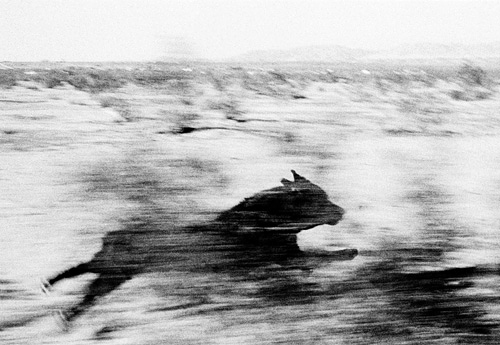 Dogs chasing my car in the desert by John Divola

London is full of dog owners who shout at their dogs. Maybe I’ve just been seeing a lot more of them recently because it’s spring. Maybe shouty owners are seasonal. On my ride to work, there’s this one intersection where I often pass an old man with a wiry moustache walking his dog. The man is usually muttering and whistling loudly – he’s always making some kind of noise. Passersby ignore him and I’ve never seen him hassle anyone. He seems insane in an amiable sort of way. But a few times lately, he’s been in a bad mood. He’s ranting and raving at his dog, as if his dog has done something to enrage him, as if the dog were a parking warden trying to ticket him or a council worker who refuses to take his rubbish bags away. This isn’t just a straight scolding or dressing down – this is a serious disagreement, a heated argument about why the man is in the right and the dog is in the wrong. The man is really yelling, waving his hands around. Meanwhile the poor dog just doesn’t know what to do. It slinks along beside him looking down at the foothpath, defeated, oppressed by his owner who has all this language. It must be a very old dog, because it doesn’t trot along like healthy dogs do – instead it walks, one leg at a time.

When I came across this scene the other day I was reminded of that old chestnut ‘the black dog’ – our preferred metaphor for depression. It hounds us, it slavers all over us and howls at night. But I wondered if a more appropriate metaphor for depression is the owner of the dog. In this case, you yourself are the dog. Your owner is bigger and seems more powerful than you and he is full of this impenetrable language. And he’s got you on a leash and has trained you to think he’s in charge, and you’re stuck with him.

As always when I see someone treating a dog badly, I was overcome by rescue fantasies.      I would swoop in on my bike, scoop up the dog in one arm and carry it to salvation. (Obviously this fantasy is problematic – of course I wouldn’t want to be responsible for the loneliness of a troubled man. A more humane action would be to befriend the old man and encourage him to take the dog to nice parks and let it off its leash sometimes to chase birds and squirrels, and so on. The metaphor becomes tangled at this point.)

Do you wear non-winter hats? 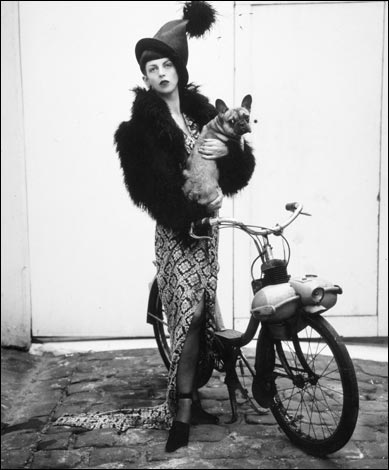 Yesterday I saw a guy striding along Kennington Road in normal civilian clothing but wearing a motorcycle helmet. Out of curiosity I looked around for his motorbike. No sign of it anywhere. Immediately the man seemed insane. Why is it, that as soon as you step away from the thing for which a helmet is required, you look ridiculous? (I’m reminded of my Great Uncle James – renowned for falling off a succession of scooters – who is known to have worn a bulbous motorcycle helmet when at the movies. I think this was to protect himself from Jaffas launched by kids in the rows behind him, or maybe it was to create a sense of total head-cushioned seclusion. I’ll never really know. Possible clue: he always held his head at an angle in photos.) I wish it was more socially acceptable to wear a helmet around so that you didn’t have to go to the trouble of putting it on and taking it off when you got on/off your bike. (Could it be that this is what Uncle James was protesting?)

Maybe the reason it looks funny to wear a helmet sans vehicle/sportsfield is that it’s become kind of unusual to wear a hat, except for a beanie in winter, or if you’re in uniform or religious dress or are going to a party. The West lives in a largely hatless age. So to wear a non-contextual hat indicates some kind of strangeness. An extreme example: a friend recalls seeing a woman walking along wearing a phone strapped around her head with a scarf. Like a bandage, wrapped around her head, securing the phone in place.

It’s been claimed that forcing people to wear helmets, as is the case in New Zealand where it’s the law, will put them off cycling. I guess because they fear looking silly. Helmet-wearing has always been controversial among cyclists, and now another study has found that cycle helmets don’t offer much protection at all against head injuries. I haven’t made up my mind on this one. The problem is I’m too suggestible. “Oh, so the no-helmet brigade is anti-capitalist nonsense and that if you hit me over the head with a baseball bat, would I rather have a helmet on or off? Weell, then…” “Oh, so my helmet could leave me worse off than not wearing one in some situations and that helmets are a sign of a failed cycle culture? Weell, then…” I don’t know enough to know. I just don’t know.

I’ve noticed something interesting, though: whenever I wear a pink helmet, most drivers give me more space when they overtake. But when I wear my ordinary old black one, I get a lot more punishment passes (a move that my brother Neil describes as being “strafed by a passing car or motorbike while on a bike: the sudden onrush of terror as a vehicle slices past mere centimetres from your body, engine revving, driver gesticulating and/or yelling abuse, followed by the sense of outrage, heightened by the fact that you have no recourse in such situations.”). Something about the appearance of the helmet seems to trigger a reaction in the driver. He or she must make a snap judgement about the kind of cyclist you are. This makes me uncomfortable. But not uncomfortable enough to stop wearing the pink helmet.

Ever just want to spit in

someone’s face, though you actually really

“The Twin Six Jesus T-Shirt proves beyond a doubt that the man himself travelled on two wheels.” (via RealCyclist)

Nothing makes me feel less special than riding my bike to work in the mornings. In a spidery mass of commuting cyclists, you’re just one more pair of legs to get in the way of someone else’s. Because it’s spring, the bike lanes have been seething. As soon as blossom fills the trees, bikes fill the bike lanes, bugs fill the cyclists’ mouths … The thing is, I guess I don’t entertain any smuggery about cycling.I can’t congratulate myself on being “one less car” or “running on fat, not money”. And I can’t whole-heartedly believe, as the cycle activism group Zero Per Gallon argues, that cycling is like:

… eating a super-duper delicious burrito every day with guacamole and cheese and sauce on top at the most fabulous taqueria mankind has ever seen, and discovering that it makes your butt look good AND it makes you feel good AND it’s extending your life AND it’s saving you money. Oh, yeah — and it’s also helping solve huge international crises, like healthcare and global warming and energy.

I’d like to point out that you can ride a bike and also be a bastard. You can run red lights at such speed that you almost take out parents with toddlers crossing at the green man. You can cycle 100 miles a day and yet contribute to any number of international crises. I’ll concede that cycling saves me money (but even on that front, considering the thefts and repairs and insurance I’ve paid for, the margins are slim). Whether it makes my bum look any better is still up for debate but evidence tells me let’s not talk about it. And my secret cycling shame is this: sometimes, cycling does not make me feel good. On a bad day it makes me feel like rubbish. It fills me with ill-feeling for my fellow man.

Of course cycling is broadly preferable to other forms of transport. On a good day I love cycling and feel proud of it. The benefits for me are mostly anti-social ones: the independence, the avoidance of public transport, and the exercise. But it’s not a silver bullet. It doesn’t automatically make you Captain Planet, or even a fine upstanding citizen. I wish it did.

Person, usually on bike
View all posts by ashleighlou →
This entry was posted in bicycles, Happiness or not, London. Bookmark the permalink.

2 Responses to Talk first to the dog