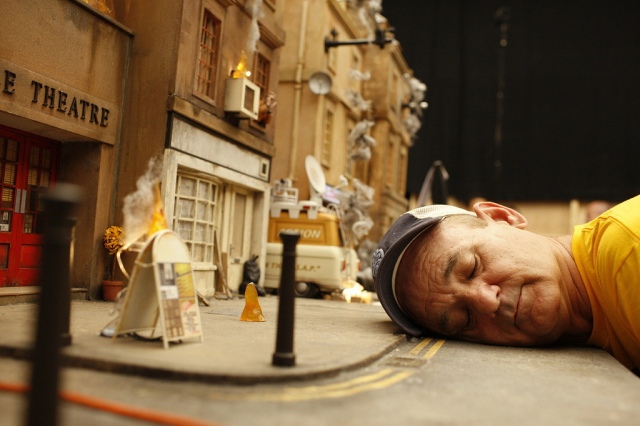 On the set of Fantastic Mr Fox (via LiveJournal)

Not the exotic any more, but the endotic.

Around 2004 a French author called Michel Dansel carried out a burying-the-verb ceremony at Sorbonne University in Paris. A few hundred guests attended – academics and writers, all in mourning dress. There was a horse-drawn hearse. I’m not sure what was inside the hearse, but it must have been symbolic in some way of the verb: “this invader, this dictator, this usurper of our literature since always!” Maybe the hearse contained the Head Verb, the verb ringleader – a major verb like “happen” or “become” or “want”.

Anyway, this event was to publicise Dansel’s novel Le Train de Nulle Part (The Train from Nowhere, under the pseudonym Michel Thaler), which has no verbs. “The verb is like a weed in a field of flowers,” he has said. Maybe forgetting that “is” is a verb, there.

This reminds me of a ritual my granddad once had my brother and I carry out: fed up with our halting speech, he wrote “um” on a piece of paper and led us out to the garden, where we made a shallow grave with a trowel, as if to bury a dead bird, and we buried the piece of paper. It was a well-intentioned, but ultimately futile, gesture. If anything, I say “um” more now than I did then.

The reason I’m thinking about, well, omission is because, having just arrived back in New Zealand, it feels like all of the high-frequency words have been harvested from my brain. All the stuff that used to be so familiar as to be white noise has tumbled out and I’m having to process it again, using what feels like a different language, or something. This is nothing new or profound, obviously – going back is just going back – but anyway, I’d quite like to hold on to this surreality for a while longer. It makes everyday things, like the trees outside the window or an ice cream van or a tui or kids playing rugby in the park, seem vivid, almost lurid, infra-ordinary, like when you have a fever as a kid and the sound of a typewriter clacking or a light switching off is almost unbearable. The only other thing I can liken it to is when you’re sickeningly in love, walking around gauming at everything.

I got more interested in this idea of the strange ordinary last year, when I was writing a (desk-drawer bound) piece about the Boring Conference 2011 in London, organised by James Ward. I came across the novelist/essayist Georges Perec, well-known as a member of the experimental Oulipo movement. Roughly, the big idea of Oulipo is to work with as much freedom as possible within literary constraints. That is, to create worlds, or to observe worlds, within very close walls. Oulipian works seem always to involve some kind of tortuous restriction, e.g. to write a novel without the letter ‘e’, as in Georges Perec’s detective novel La disparition (The Disappearance) or to strive for the limits of your subject, as the same author did for An Attempt at Exhausting a Place in Paris, a small book that he wrote over several days in three different Paris cafes in 1974, with the goal of describing the place so completely that he would somehow, well, exhaust it.

A little girl, flanked by her parents (or by her kidnappers) is weeping
A bus (Globus) three-quarters empty
A lady who has just bought an ugly candleholder goes by
A small bus goes by: Club Reisen Keller
Bus. Japanese.
I am cold. I order a brandy
A car goes by, its hood covered in dead leaves

Perec was obsessed with what he called the infra-ordinary: “what happens everyday, the banal, the quotidian, the evident … the background noise, the habitual; how can one account for it, how can one question it, how can one describe it?” It’s only now that I’m finally able to properly grasp what he was getting at. Some of his essay titles:

It’s like he’s visited a different planet and returned with irresistible findings. But this is an ordinary world, not exotic but endotic (another of his coined terms). James Ward’s introduction at the Boring Conference summed this up perfectly, in my mind – he strode out in a grey suit and a skinny tie, a bit like a banker from the 70s: “Welcome to the Boring Conference. We’re here to look at the things that are so familiar to us that they become invisible. The point of this conference is to make them visible again.” (Sure enough, we then spent the day listening to talks on hand-dryer models, favourite toilets, vending machines, tube lines, eating at Nandos, the square root of two, the reorganisation of a local supermarket …)

Anyway, I’ve lost the thread of my point completely because I just heard a tui outside, and then rain. So I’ll just leave these Perec ideas (from L’infra-ordinaire) over here.

Make an inventory of your pockets, of your bag. Ask yourself about the provenance, the use, what will become of each of the objects you take out.

What is there under your wallpaper?

How many movements does it take to dial a phone number? Why? 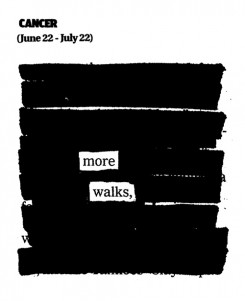 Person, usually on bike
View all posts by ashleighlou →
This entry was posted in Change, London. Bookmark the permalink.

1 Response to Describe your street. Describe another street. Compare