Don’t you know who I am in my head?

Two or three years ago I taught a course in prose and discovered my students were watching the soap operas every morning and afternoon. I don’t know when they studied. So I watched two or three just to see what was going on. They were boring. And the advertising! One student wrote a story about an old man who was getting ready to have an old lady to dinner (except she was really a ghost), and he polished a plate till he could see his face in it. It was quite well done, so I read some of it aloud, and said, “But look, this is impossible. You can never see your face in a plate.” The whole class, in unison, said, “Joy!” I said, “What? What are you talking about?” Well, it seems there’s an ad for Joy soap liquid in which a woman holds up a plate and sees—you know the one? Even so, you can’t! I found this very disturbing. TV was real and no one had observed that it wasn’t. Like when Aristotle was right and no one pointed out, for centuries, that women don’t have fewer teeth than men.

– Elizabeth Bishop, The Art of Poetry No. 27

In the past week I’ve been on the road with two wonderful writers, Pip and Kirsten. We’ve been reading from our first books and trying to talk sense about writing. For added authenticity our vehicle even looked a little bit like a van. My book, which I’d been using as a coaster, now looks like it’s been thrown out of lots of car windows, sat on at various small-town pubs, coughed up by a manatee etc.. Before this week, I hadn’t even read it back to myself. You’d expect that having written a book, you’d have it all in your bones anyway, but it’s as if, once the thing was printed, it morphed into a piece of mismatched furniture – like a weird collapsible office chair with the plastic still on that someone had given me and I was sitting on it out of politeness. After this week, though, I feel like I’ve got it at the right height and have figured out the levers (which are surprisingly un-straightforward even though they’re only up/down). I’ve swivelled around on it, fallen off it, stuck chewing gum on the underside (I’ve come too far with this chair metaphor to turn back now) and now I don’t feel as uncomfortable having it around.

All these manoeuverings were done in public. And I’d thought that I’d get better at it. But I think what actually may have happened was that I got worse. (To anyone who came to our second-to-last event and heard me try to answer the question ‘What is the function of poetry?’, I’m sorry.)

The reason why it was unexpectedly hard is that I wasn’t used to seeing/hearing myself reflected back so much: my voice in a microphone, people’s faces as I read from the book, photos of myself, my voice faltering (often) when I didn’t know how to answer a question. I found that I didn’t have much control over any of those things – or, not the kind of control you have when you’ve got distance on your side; when you’re behind a screen writing a tweet, or a thing like this, or even when you take a headshot of yourself and put a filter called Nashville over it. It’s true that we try to control the things we find uncomfortable, and that when you can’t, this quickly turns to a ghost the person you think you are in your head. Now, I know that all this is also known simply as ‘being out in the world’, but I experienced being out in the world more intensely than usual because of the performance element of touring as ‘a writer’. It made me wonder whether people who have high-profile jobs get this process out of the way fairly quickly at the beginning, or whether they’re constantly cycling through it, re-shuffling their ideas of themselves. Maybe you get to a point where your reflection is innocuous: just a tool to help you do your job.

The tour made me more aware of old reflexes, too – embarrassing, small-minded ones. Mainly the reflex to avoid ever seeing myself reflected. If I know there’s a mirror coming up, I either hurry past it or come at it on an angle, like a crab. I avoid being in photos, particularly photos that show any bit of my body, unless they’re non-negotiable photos or carefully controlled selfies, with the crucial filter (‘Mayfair’, ‘X-Pro II’, ‘Valencia’; even ‘Normal’ starts to look like a filter), which has the pleasing distancing effect. There’s a sort of escapism in it: escapism from yourself, and from the reactions of others if they saw how you ‘really were’. Although the exposure of the last couple of weeks has sometimes made me feel like my skin and my head have gone transparent, it’s felt necessary, in the same way that properly dog-earing my book was necessary. It’s meant opening up, rather than letting myself lurk underneath like a coaster. It’s also made me start to adjust my ideas of a ‘bad representation’ – a bad photo, a bad answer to a question, a bad recording. I started to feel OK about saying ‘I don’t know’ or ‘Maybe I should just get a real job.’

A friend of mine says she has been trying to train herself to worry less about photos of herself by letting the ‘bad’ photos stand. Rather than rushing to delete them, she’s tried just letting them be there. (I tried a similar thing in a recent Twitter Poetry Night, in which I tweet people’s recordings of poems from PoetryNightNZ, and decided – the hell with it – to let my very average first-take stand. And saved myself a whole lot of faffing about.) Photo apps like Instagram make this an unusual stance – the whole idea is that you shouldn’t have to put up with photos that look a bit average; that pictures of yourself and your surrounds can be better, more interesting, can provide an easier reflection if you just manipulate them slightly.

A few weeks ago, rifling through a chest at my parents’ place, among all the VHS cassettes and spilled Monopoly notes and hotels, I found piles of photos. Many of them were in sticky old albums, with some attempt at chronology, but most were still in their faded envelopes from the Te Kuiti chemist, with stacks of disordered negatives. A lot were great. But a lot more were just terrible – really terrible. Blurry, red-eyed, at bad angles, with badly angled faces. The dog positioned awkwardly across someone’s chest as they slept; someone making a sandwich while grinning evilly; someone running in a way that made it look like they had no arms. I was glad to see the photos; maybe at some point, it had been decided that they were at least as relevant as the good ones and that they should be kept. They seemed somehow truer than the posed ones, and their absence of self-consciousness was comforting. I felt a bit of a pang for the more recent bad photos I’ve so readily deleted, even though I’m always relieved (and slightly drunken with power) at that moment when they’re gone. 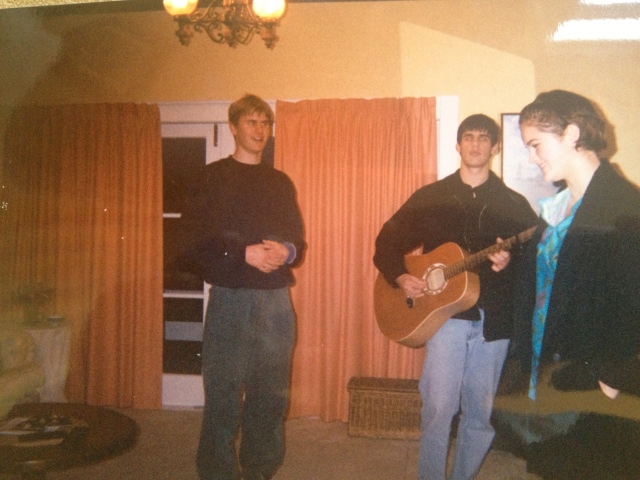 My brother JP, his friend Raj (with guitar), me

Person, usually on bike
View all posts by ashleighlou →
This entry was posted in Memory, Poetry, Social media, Working. Bookmark the permalink.

1 Response to Don’t you know who I am in my head?