For instance, when hearing a loud metallic sound outside at night and realising that the cat is to blame, you probably wouldn’t say to yourself, “The cat has knocked the dustbin over.” Instead, you might just say, “The cat,” since that utterance contains all the information you need to express to yourself.

Late last year I took on a short tutoring role, and because I hadn’t done much teaching of this kind before, I was set upon by a comprehensive range of insecurities. These always swarmed in late at night and harvested all of the rational areas of my brain. What made these nights different from other times of worry, though, was that my internal monologue was very loud, and very languagey. By this I mean that usually the monologue, or inner voice, is an incoherent blur – more like wind singing between wires than a message travelling along those wires. I can’t pick out individual words. And a lot of the time, the inner voice has no sound quality at all. It’s more like a current, something pulling at you from below. This time, full, pointed sentences were coming at me. (I shouldn’t really be calling it an internal monologue, because it took the shape of a dialogue, an exchange between my different points of view.) ‘You don’t know anything about anything, fool.’ ‘I know, I know, but I thought I did.’ The most persistent one was this: ‘You’ve got no CHARISMA … charisma … charisma … charisma …’

I knew I wasn’t going mad, but I also knew that this was becoming borderline. (Let’s pretend that there are tangible borders.) In this anxious state I would begin to imagine charisma as a measurable substance, something you could find traces of in a person’s bloodstream, or as a genetic quirk, like double-jointed elbows or hypermobility. I imagined I had cells missing. Also, in my head I started filtering through charismatic individuals I have known: like the Terminator, I would zoom in on each subject for a few seconds in order to evaluate their vital stats. And my inner voice would quickly dismiss some and affirm others as gods.

I know this all sounds quite crazy. It is hard not to sound crazy when you are talking about the voice inside your head. I’ve been thinking about inner voice a lot at the moment because I’ve been reading Charles Fernyhough’s book A Thousand Days of Wonder (or The Baby in the Mirror) – ignore the cheesy covers – and his New Scientist article ‘Chatter box’, in which he talks about the theories of the Russian psychologist L. S. Vygotsky on inner voice. One of Vygotsky’s theories took shape when he observed children talking to themselves while playing (and I watched my four-year-old niece doing this too, talking to herself with two voices that sounded a lot like Gollum/Smeagol; this was actually quite frightening). Vygotsky proposed that this ‘private speech’ branches out of the dialogue that children have with their parents and caregivers and other kids – but over time, that private speech goes deeper, becomes internalised, to form an inner voice. The outward mutterings turn inwards. As they do so, they become abbreviated, condensed, fragmented. They may not even resemble language at all. Vygotsky likened this state – which is really, simply, thought – to a cloud. And the inner voice transitioning to actual uttered speech, he likened to ‘a cloud shedding a shower of words’. 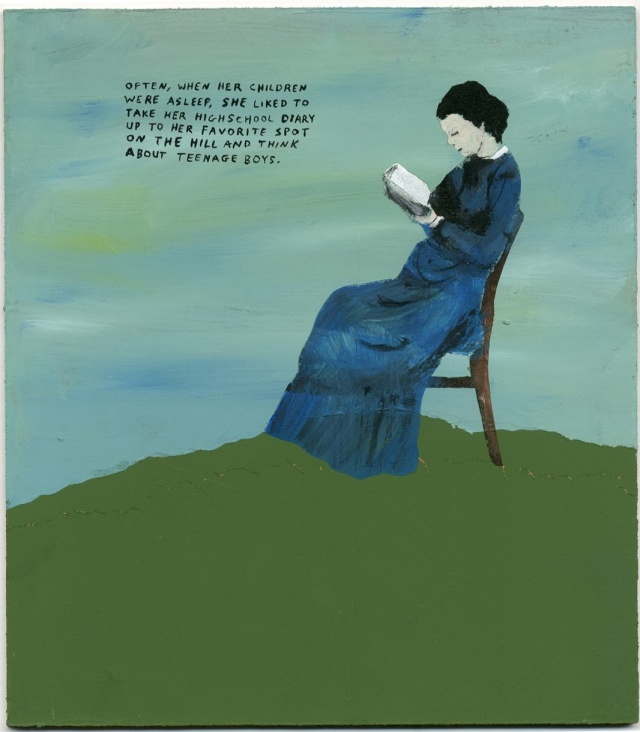 I like that idea a lot, because most of the time my inner voice has cloudlike properties. I suspect it’s similar for many people. It’s a nebulous, continuously-shifting blur of responses and emotions and ideas that aren’t ready to be put into words yet, but a few of them are beginning that slow surge towards language. I like what the novelist Carl Shuker said once, about how when he was getting ready to write a novel he built up a ‘head of steam’. I have this image of this seething steam cloud at the top of Carl’s neck. 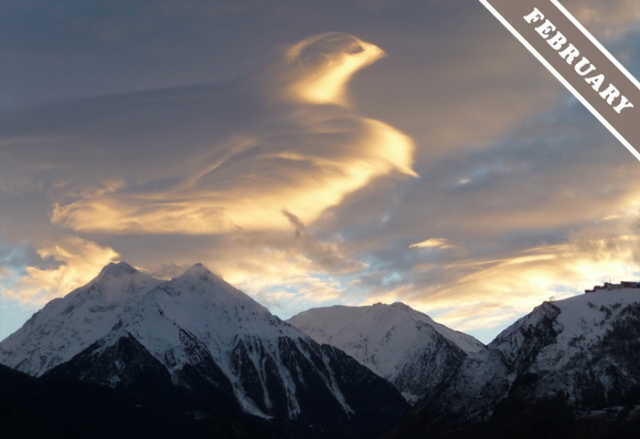 Cloud of the Month for February (by the Cloud Appreciation Society)

It’s a shame that the word ‘cloud’ has been repurposed for that vast online network because it’s an excellent, if well-worn, metaphor for thought. If not a cloud, I think an inner voice is like the metallic ooze before the Terminator reconfigures into a body.

It strikes me that when my inner voice does have readily defineable words, has sentences, it’s nearly always negative and forceful, like someone shouting from a car window as they go by. One of my most terrifying experiences as a kid was thinking I could hear someone shouting inside my head, when I had a fever. I was sure that if you’d pressed your ear to my ear, you would’ve heard the shouting. My inner voice seemed to come from someone else and so it seemed alien. I’m over-simplifying, but it seems to me that negative thoughts find their way into language more easily than neutral or positive ones – that they know more words, are always first to put their hands up.

One thing I’d forgotten about London, which I remembered when I visited, is that a lot of people talk to themselves – on the street, in shops, in parks, in changing rooms. Their private mutterings have turned outward again. (It’s true that in a few cases, people who I’d thought were talking to themselves weren’t talking to themselves at all; they were talking on hands-free devices – which was interesting in itself, because it reminded me of Vygotsky’s theory that our inner speech develops out of dialogue with others.) I wonder how the filter between inner voice and outer voice wears away or breaks, and whether living in a huge city affects your ability to hear your inner voice and to discern what needs to be spoken aloud. And in fact, on a few occasions, walking around the city for hours, getting tired, I noticed I was starting to murmur very quietly to myself, usually when looking at my phone or trying to decipher a map. ‘Ohhh, what’s this, wait, idiot – hang on, ah dammit – maybe I’ll just go over here …’ It was a fragmented babble that seemed to help calm me and guide me.

This reminded me of Andrew Irving’s project New York Stories: The Lives of Other Citizens, in which he recorded the ‘inner dialogues’ of people in New York City in 2011. He would go up to strangers and ask, ‘This might sound like a strange question, but can I ask you what you were thinking before I stopped you?’ Some people shook their heads and kept walking, but if they didn’t (about 100 people altogether), he would ask them to put on a microphone headset attached to a digital recorder, then to say what they were thinking as he followed along behind with a camera. He couldn’t hear what they were saying, and they were free to walk wherever they liked. Even though the clips themselves are actually kind of dull, what I like about this project it that it tries to capture an individual person’s ‘cloud’ and make it a part of the city, just for one moment in time. And it also creates a portrait of one individual’s consciousness as it unfolds in a particular place and time. Like Mrs Dalloway roaming about in London, her ‘ordinary mind on an ordinary day’.

Life is not a series of gig lamps symmetrically arranged; life is a luminous halo, a semi-transparent envelope surrounding us from the beginning of consciousness to the end.

I guess the other thing that fascinates me about this project is that anybody who does talk to themselves out loud, continuously, in the street, is usually considered crazy or drunk or stoned by passersby – someone to be ignored, someone who’s gone wrong. The New York Stories project reframes that and asks the viewer to listen to the person talking to themselves. It asks the viewer to see an artwork. I find this kind of uncomfortable for reasons I can’t quite explain yet.

Another ‘inner dialogue’ project I came across recently: I did a lot of running in London, and a friend mentioned this short film called The Runners, by Matan Rochlitz and Ivo Gormley, in which the two directors rode a bicycle and trailer around London parks asking runners questions about their lives. The idea was that, distracted by running, perhaps people would open up to difficult questions (‘Are you in love? Who do you care about most? What do you want to do with your life?’). And they do.

In the spirit of creating more of a luminous halo of a blog post here than a series of gig lamps symmetrically arranged, once I had a portrait of one of my guardian angels drawn. That’s right. This happened at something called the Health and Wellbeing Expo (or something along those lines) in my town, which was held in the Civic Centre, and I went along because I wanted to get my aura photographed, which was clearly the more spectacular option, but it was ten dollars, and I only had five. You could get your guardian angel drawn for five dollars. The woman who drew the guardian angels was sitting at the wooden desk with a sketchpad and some coloured pencils, next to the stage. A few months later I would sit in that same spot in a small orchestra playing flute for a town production of The Sound of Music.

The woman told me that I had not one but five guardian angels. However, the deal was that she would draw only one. ‘Her name’s Emily,’ she told me as she began to draw the angel’s head and shoulders. Emily took shape rapidly. I can still see the picture clearly in my head. She had a prim, unsmiling, square-ish face, with heavy brows, and brown, centre-parted hair swept up into a bun. She wore a brooch at the top of her frilled collar. I remember feeling disappointed that she looked so stern and plain. I watched as the woman turned over the piece of paper and wrote a message from Emily to me. It said: ‘In both name and nature, you are Grace.’ This was also disappointing, as clearly my name wasn’t Grace. I asked the woman about the other four angels – what did they do? One was a dancer (apparently she was dancing around the whole time the woman was drawing Emily’s picture), and one was a quiet man who wore a black top hat and seemed to serve no function. There was also a jester – an actual court fool, juggling and clowning, which only now strikes me as pretty funny. I don’t remember who the last one was. But the crucial thing was that they all talked a lot, at me but mostly to each other. When you are thinking something to yourself or lying awake at night thinking, the woman told me, you are actually hearing your guardian angels. I liked this idea that my inner voice came from somewhere apart from me. And in a tenuous sort of way, if Vygotsky was right, it did: ‘Through others we become ourselves.’ That voice grew out of all the earliest dialogues, grew out of the voices of parents and grandparents and neighbours and other weird kids.

7 Responses to An ordinary mind on an ordinary day